Financial results of Euroapotheca Group of 2018: the year of a historic breakthrough 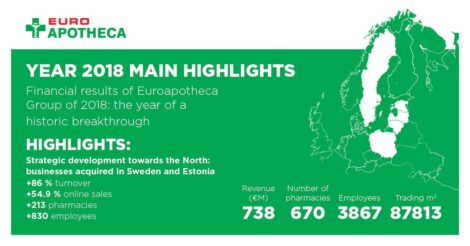 Euroapotheca, the international Group of companies, which brings together pharmacy networks in Lithuania, Latvia, Estonia, Poland and Sweden, successfully expanded its business in 2018. The company increased its scope of business in home markets of the Baltic States and Poland, and implemented strategic development projects, which doubled the business scope of the Group – it purchased pharmacy networks in Sweden and Estonia.

Strategic development – businesses purchased in Sweden and Estonia, and sold in Ukraine

In 2018, Euroapotheca engaged in its active strategic development. In 2018, the Company purchased service organization “Apoteksgruppen i Sverige Holding AB” from the Kingdom of Sweden which provided franchise services to 186 pharmacies operating under the name of “Apoteksgruppen” and owning three pharmacies of its own. The company also acquired 156 pharmacies from private investors in 2018, as well as the right to provide franchise services to 30 independent pharmacies operating under the name “Apoteksgruppen”. In QI 2018, Euroapotheca completed both transactions and became the owner of the fourth largest pharmacy network in Sweden.

In 2018, the subsidiary of Euroapotheca in Estonia “Euroapteek” purchased a network of 13 pharmacies “Ülikooli Apteek” from the Finnish company “Yliopiston Apteekki” and the right to provide all franchise services to another 11 pharmacies. Also, Euroapotheca closed yet another deal in Estonia in 2018 – the Company’s subsidiary in Estonia “Baltfarma” acquired from “Yliopiston Apteekki” the wholesaler of pharmaceuticals “Medapta”.

Euroapotheca invested over EUR 300 million in the transactions in Sweden and Estonia. Due to the changed strategic direction, Euroapotheca sold the retail pharmacy network in Ukraine and left the Ukrainian market in 2018.

Having purchased pharmacy networks in Sweden and Estonia in 2018, Euroapotheca Group became the largest pharmacy network in Northern Europe and ranked among the TOP 15 European pharmacy retail groups (in the 11th  place).

The audited group performance results of 2018 do not include the turnover of “Apoteksgruppen” and “Ülikooli Apteek” of the first two months, as they were purchased at the end of the first quarter of 2018. According to pre-audited data, after the inclusion of the total turnover of the newly acquired pharmacy network in 2018, it was EUR 740 million as at 31 December 2018.

Turnover grew in the Baltic States and Sweden, and decreased in Poland

The turnover of medicines and other health and beauty products, which Euroapotheca Group sold online (except for prescription drugs, which cannot be sold online in Lithuania), increased by 54.9 % in 2018, accounting for 1 % in the total pharmacy market of Lithuania (the Group did not provide online sales services in other markets in 2018).

+213 own and franchise pharmacies

+830 employees throughout the Group

Raimonda Kižienė, CEO and Chair of the Board of UAB Euroapotheca:

2018 was the year of strategic change in Euroapotheca Group – the business doubled, more than two hundred new pharmacies and eight hundred new employees joined our network, transforming it from more local into a truly international network of pharmacies.

Last year, not only did we start operating in the Swedish market, but we also managed to finish the consolidation of the acquired “Apoteksgruppen” pharmacy network, turning it from a franchise-based into a centrally operating network. We strengthened our position in all Baltic States, in Estonia in particular, where we purchased and integrated the pharmacy network “Ülikooli Apteek”. We have pursued efficiency and managed to maintain almost the same level of turnover with a much fewer pharmacies in Poland, moving out from Ukraine. All these strategic decisions led to the doubling of the scope of Euroapotheca’s business, allowing us to become the largest pharmacy network in the Northern Europe and rank next to the top ten European pharmacy networks.

We continue seeing a great potential for growth in Sweden, Latvia, Estonia and Poland, retaining current positions in Lithuania, and we also see good prospects for new acquisitions and partnerships. Another equally important priority of the Group is the integration of old and new businesses and business systems as well as the Group-level synergy, the creation of a greater value and better supply in all the countries where we operate.

While we see good development opportunities in the pharmacy business, we also observe its challenges that have been growing each year – group-wide synergies in countries of our development have been hampered by different local business regulatory environments, with regulation becoming more intense and more difficult to predict. On the other hand, changing habits of people offer new opportunities for business growth – we notice that our clients in the Baltic States, Sweden and Poland are more concerned about their health, healthy lifestyle, nutrition and appearance, beauty and aesthetics, also paying more attention to prevention of both serious chronic diseases and minor illnesses.

We will continue seeking to increase the penetration of online sales – our turnover of goods sold online has been rapidly increasing in Lithuania for a few years now, thus we will pay special attention to the development of online sales in Lithuania and other markets in the upcoming years.

Euroapotheca is an international group of companies operating in the Northern, Central and Eastern Europe, managing retail pharmacy networks and wholesalers in Lithuania, Sweden, Latvia, Estonia and Poland. Euroapotheca operates 670 pharmacies, which serve 40 million customers per year and employs more than 3.8 thousand people. Euroapotheca is owned by the international UAB Vilniaus Prekyba Group, which is one of the largest groups of outlets in the Baltic States, Central and Eastern Europe.